A Handbag of Harmonies -  about us

Formed in Chester in 2000, the choir has 70 members and can offer performances from 20 minutes to a full evening, with as few as 20 and as many as 60 singers singing a cappella or accompanied by piano, saxophone or cello.

Led by the charismatic Matt Baker, who arranges all our material, we sing a wide repertoire of songs from the 1930s to the present day, including the Eurythmics’ There must be an Angel, the 1936 song The Way you look Tonight, It’s Getting Better by the Mamas and Papas and the gospel song Shackles, as well as several original songs of our own.

Matt is a professional composer and performer whose work has taken him up and down the country and abroad. He also wrote the music for the renowned cycles of Chester Mystery Plays in 2003, 2008, 2013 and 2018. Matt is also artistic director of Chester’s Theatre in the Quarter.

A Handbag of Harmonies has performed at venues across the UK including London's Bloomsbury Theatre and Queen Elizabeth Conference Centre, Manchester Town Hall, the Liverpool Empire Theatre and the Gaiety Theatre on the Isle of Man.
Closer to home we have performed at the Llangollen International Eisteddfod, and at venues in Chester including Storyhouse, Alexanders and St Mary's Centre, to name but a few.
We have also travelled further afield, singing in Germany, and taking part in international exchanges with choirs from Italy (2015) and Belgium (2018-19).

In 2008 we entered our first ever competition: the BBC's prime time Saturday night talent show, 'Last Choir Standing'. A Handbag of Harmonies was the only women's choir to reach the top 15 out of nearly 1,000 entries - judge Russell Watson said: "I can't remember having so much fun watching a choir before!" 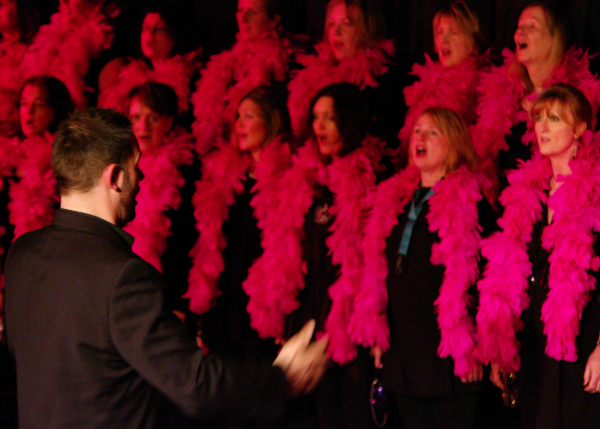 In 2013, A Handbag of Harmonies was thrilled to work with Theatre in the Quarter in the creation of a new, exciting musical play, 'Handbag! The Musical', inspired by the choir and written by award-winning playwright Janys Chambers, which toured venues in Chester and Cheshire.

Other highlights include: overall winners in Manchester Pride Parade 2011; Silver Award Winners in Manchester Choral Competition 2010; Gold Award Winners with our collaboration with Oxfam for our anthem 'When The Waters Rise' at Tatton RHS Show 2011; co-producers of 'Across The World' anthem for the BBC Cultural Olympiad and Music Nation, which attracted an audience of over 5000 in 2012.

See our gallery for much more